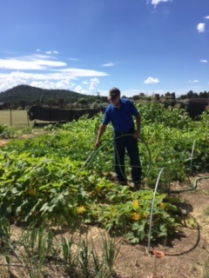 We understand our faith is in the Lord Jesus Christ, and not in mankind, a world leader,  economic means, or ourselves.
Conclusion:
How are we to face these uncertain times?
Repent and get right with Jesus Christ:
We can face these times when we have made the  number one decision and our actions give witness thereof.  That  decision is to Trust Jesus as Lord Savior.   We do this by understanding our sin has separated us from our Creator.  God sent His Son Jesus to die on the cross for your sins.  You must turn from your sin –repent– and call on the Name of Jesus Christ to save you, receive Him by faith, Surrender to His Lordship in your life and follow Him.  You can do that now in a prayer.  Christ hears our truthful  prayers.
As a Believer, Get with the program.  We need to quit running with the world, and Abide in Christ daily.   All the promises and all the commands Christ has given us are  sufficient to get every believer through any event that we might go through.   We don’t know when Jesus will return, but we do know if it is the morning watch (see Mark 13:35) until that time, we are ready to face what ever comes to this world.

Walk daily with Him. Abide in His Word.   And Know He is on His throne.©
If I can be of help, please contact me.  Pastor Daryl Bennett   This message is copyright, no portion may be used without giving credit to its author.

How to Connect with US